Mali's conflict and a 'war over skin colour'

Mali's conflict and a 'war over skin colour'


Many Tuaregs have fled Mali after a split along colour lines. But will the factions unite against an Islamic state?
Afua Hirsch
guardian.co.uk, Friday 6 July 2012 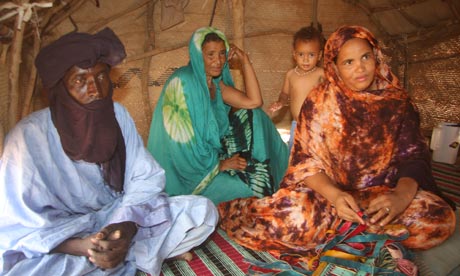 'Skin colour is rarely discussed as a factor in Mali’s current conflict, but its importance cannot be ignored.' Photograph: Afua Hirsch
I don't know one word of Tamasheq, the ancient Berber language spoken by Tuaregs, tens of thousands of whom are currently living as refugees in northern Burkina Faso. But one thing I could understand from the group of Tuareg men I sat with under a tent in Mentao – an inhospitable refugee camp a few hundred kilometres from the border with Mali – was the repeated gesture as they pointed to their skin.

"C'est à cause de la peau claire", the interpreter said over and over again in French. In English: "It's because of our light skin."

Skin colour is rarely discussed as a factor in Mali's current conflict, but its importance cannot be ignored. Some analysts I met in Burkina went so far as to say that the events in Mali – an uprising by Tuareg separatists the MNLA, a military coup in the south, and the ongoing near collapse of the political economy – amount to a war on skin colour, plain and simple.

Mali's military coup was triggered by frustration among the Malian army at difficulties they encountered trying to contain an uprising by Tuareg rebels. The rebels – led initially by the secular separatist MNLA but now deeply entangled with Islamists Ansar Dine and al-Qaida in the Islamic Maghreb – were in turn driven by their frustration at being marginalised and mistreated by predominantly black, southern-ruled, post-independence Malian governments.

This frustration dates back to the French – who colonised the whole of Sahelian west Africa – and who, motivated by the possibility of exploiting oil in the Sahara, played with the idea of giving the Tuaregs their own independent desert state. As one former ambassador to Mali put it: "The idea never got off the ground, but it left a residue of tragically heightened Tuareg expectations."

The failure to realise this dream, compounded by decades of under-representation, under-investment and under-development in their desert home in the north has radicalised Tuaregs and reinforced their feelings of difference from Mali's other ethnic groups.

"The Mali government put up so many barriers to stop us living the way that we have always lived," Ellagala Ag Amina, 57, told me angrily. "They have demanded our livestock and our harvest, yet in return they gave us nothing – no schools, no hospitals, no infrastructure, nothing."But the manifestation of the Tuareg sense of discrimination lies firmly in their fair skin. Amina is a case in point. After the last Tuareg uprising in the 1990s, a peace agreement with the government led to more efforts towards integration and he – a Tuareg – gave his support to a united Mali and joined the national army.

But he says that as soon as the recent Tuareg rebellion resurfaced, this fragile harmony broke down and old divisions – particularly between Tuaregs and the black ethnic Bambara – who dominate the Mali army – reared their ugly head.

"I fought on the side of Mali. But when the MNLA rebellion started then it split us again, and the Mali army turned on us Tuaregs," said Amina. "Two of the Tuareg officers had their throats slit. I knew I had to leave."

"After we left, everything was destroyed by the Mali army. Tuaregs are targets for them because of our light skin. Now I feel ashamed that I fought with the army – I still have the heart for fighting, but now I would fight against them, for us, for our independent state," he said, pointing to his skin.

The reality, however, is that most Tuaregs do not want to take up arms. Instead they have fled the fighting, and the influx of foreign Islamists whose version of Islam they say is unrecognisable to them.

This has ignited new issues of race and discrimination. One NGO I came across in Burkina whose mandate was to help Tuareg refugees in camps like Mentao found that its black, Burkinabe staff were refusing to work with the Tuareg. These Burkinabes felt aggrieved by the reputation of the Tuaregs for enslaving black Africans – a history that still plays itself out in the Tuareg caste system – where "Bella", dark-skinned members of the tribe who were once slaves, still occupy the lowest positions in Tuareg society.

When I met Tuareg women at Mentao, they paid me their ultimate compliment of suggesting that I myself could pass for Tuareg and, if I allowed them to dress me in their sunset-coloured robes, they could find me a Tuareg husband.

This offended one of the Burkinabe women who was with me. "Aren't I beautiful too?", she asked. "Yes, yes, sorry!" the Tuareg women replied. "We didn't mean to offend you. It's just that her skin [pointing to me] is fair like ours."

It's difficult to unpick Tuareg views about their fair skin and whether this still translates into a sense of superiority over black Africans. Their neighbours obviously feel that little has changed since the days when the Tuareg regularly raided and pillaged black African pastoralists, and then kept their people as slaves. The Tuaregs themselves claim that in addition to being attacked by the Malian army they fled their homeland to escape from armed Bella militias who are also targeting anyone with light skin.

But one thing is clear: no matter how entrenched Mali's divisions are along colour lines, the Tuaregs have a bigger enemy to fight – Islamists. As one Tuareg woman, Fadimata Walet Hadane, put it: "If it's a choice between one Mali, and being part of an Islamic state under sharia law, we choose one Mali."

I don't buy this story in its entirety but I see is whatever unities the Tuaregs who are feeling disenfranchise now....SMH.

TOLOMB said:
I don't buy this story in its entirety but I see is whatever unities the Tuaregs who are feeling disenfranchise now....SMH.
Click to expand...

The Tuareg separatists allied themselves with muslim extremists and now they're paying for it. I have little sympathy for them. Also, the Arab incursions have displaced them much move over the centuries. Being, nomadic peoples, they cannot claim Mali, and they are a minority (far outnumbered by black African ethnic groups) in the north. According to a Malian professor I've listened to, they were not to only group to be marginalized by Malian governments, but of course, they are the proud "blue men of the desert" who had to live in a country that's ruled by Black men (slaves). Let them try this shit in the northern Africa and see what the Arabs do to them. Because of the alliance with the Arab islamists, Africans have lost more territory to the Arabs.
You must log in or register to reply here.
Share:
Facebook Twitter Reddit Pinterest Tumblr WhatsApp Email Link
Top