A female transgender MMA fighter who just kicked an opponent's ass in 39 seconds has set her sights on the UFC. 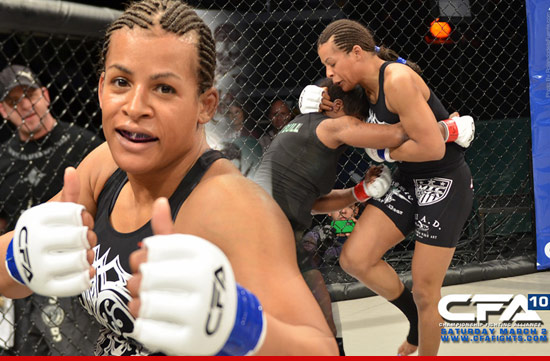 Fallon Fox was born a man. In 2006, when she was 30, she had gender reassignment surgery.

Fox is now a MMA fighter for the Championship Fighting Alliance (CFA). Her record is 2 and 0 after destroying Ericka Newsome Saturday night in 39 seconds with a vicious knee to the head.

Fox says she now wants to fight "at the highest level" -- which in the MMA world is only one place -- the UFC.

Fox insists she is a woman in every respect and just happens to fall into the category of postoperative transsexual. She compares herself to any other category of women, including blacks, lesbians and the disabled.

Fox says she has no advantage over naturally born women. 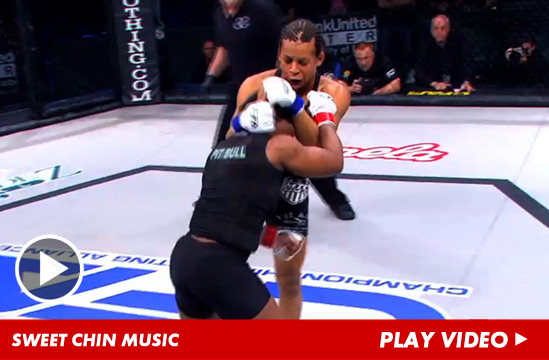 The owner of CFA, Jorge De La Noval, tells TMZ, "CFA is an organization which does not discriminate against any fighter ... as long as they are professionally licensed."

As for fighting in the UFC, Dana White tells us to fight in the UFC ... Fox would have to get the green light from the state athletic commission. But he also says Fox hasn't proved herself yet ... the 2 women she's beat have never won a fight.

Let her in UFC ana says, "She's gotta win some real fights to even talk about the UFC." And Dana warns, "It's not like transgenders who play golf or baseball. UFC is a contact sport."


Video of fight inside link.

Thats not fair to the other women she is fighting...

Is she at least getting hormone replacement or estrogen or whatever... or do she still got Testosterone in her..

Hello BKLYN said:
Thats not fair to the other women she is fighting...

Is she at least getting hormone replacement or estrogen or whatever... or do she still got Testosterone in her..
Click to expand...

hmm it depends.. we talk a lot about gender equality.. may be it is about time.

here's my take on this.


If he/she had gotten a gender reassignment surgery prior to puberty, before all the male hormones kicked in and gave him/her their present musculature and physique, then he/she would be more or less physically indistinguishable from a female and it would be no big deal to let him/her fight in the women's league.

he didn't make his gender transition until he was 30. By that time, he had already gone through puberty and developed completely as a man, musculature and all. Even if he had taken oestrogen and developed breasts and had his male genitalia removed, that wouldn't have diminished the physical gains he made while he was a man THAT much, and the fact that he's still training as an MMA fighter means that in all likelyhood he's just as strong as he was prior to his reassignment surgery. He has the advantage of having had testosterone in his system for 30 years, and having body cells that are more responsive to androgens than a woman's body would. there's no way it would be an even fight between himself and women who were naturally born.
You must log in or register to reply here.
Share:
Facebook Twitter Reddit Pinterest Tumblr WhatsApp Email Link
Top