First one was a classic
B

The interesting thing is that the plot is unknown, however, the story begins two hours after the first movie ends. 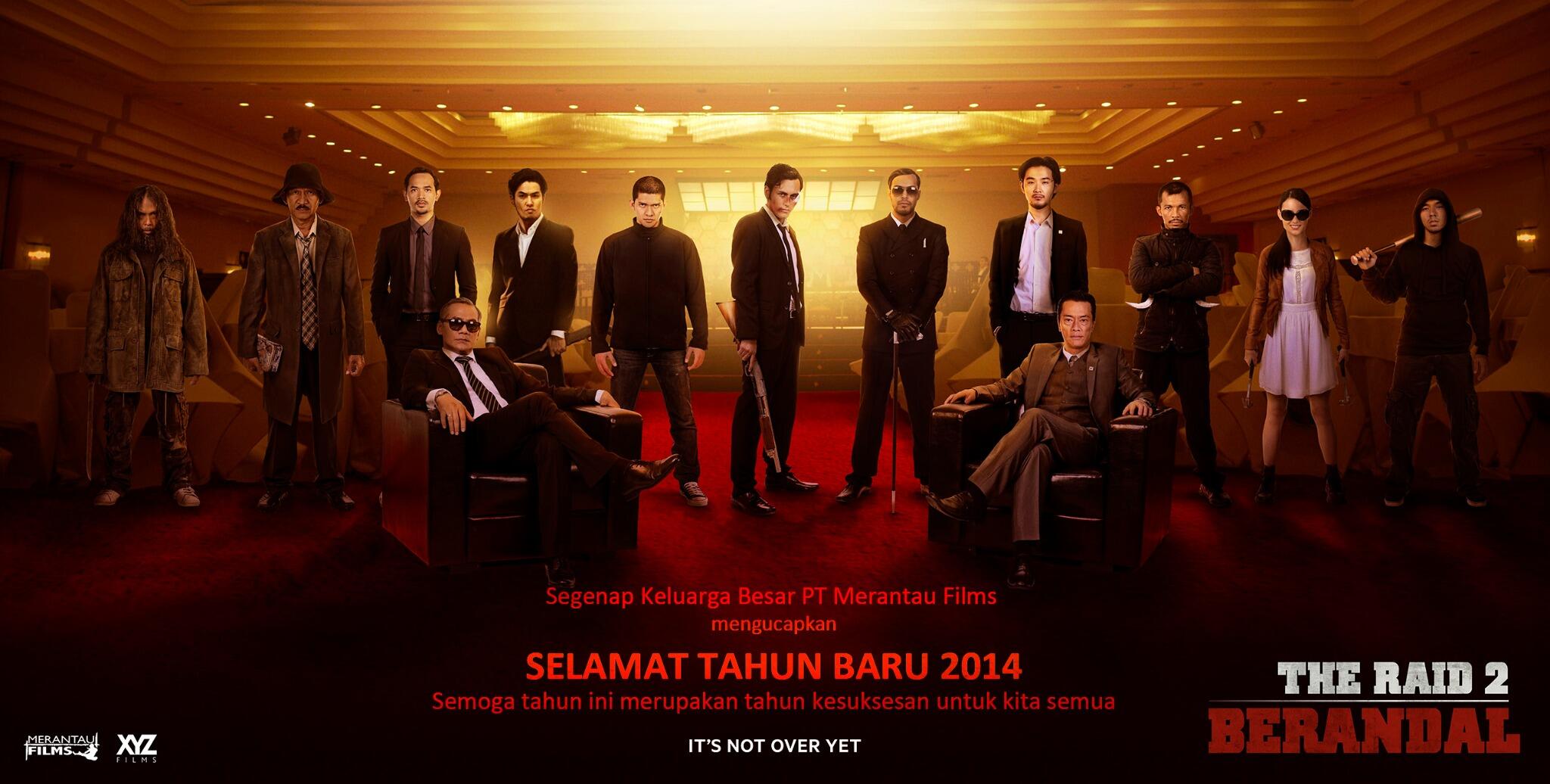 No disrespect to Tony Jaa, but I have to respectfully disagree with this and that's because The Raid Redemption has NO competition.

I did a thread on part one earlier: http://www.islandmix.com/backchat/f23/must-see-action-flick-249770/

I'll go as far as to say The Raid Redemption was BY FAR THEE greatest Martial Arts/Action film ever in cinematic history. When I say this I mean combination of Martial Arts (fighting) and action (shootouts + stunts).

And I have watched from waaaaay back in the Golden Harvest/Shaw Bros days and have seen countless movies of this genre so I'm no rookie when it comes to viewing/reviewing martial arts films.

I was lucky enough to see a ad on TV for this as they were showing this at a film festival and I went to the theatre thinking beforehand: "Yeah this'll be just another good martial arts/action flick a la Jet Li once he crossed over to the West and became more mainstream, etc".

How WRONG I was!! I was blown away by the sheer brutality, ferocity of killling and intensity. This simply surpassed anything I have ever seen.
D

badra100 said:
The interesting thing is that the plot is unknown, however, the story begins two hours after the first movie ends.
Click to expand...

I'm not one to be sold on movie reviews but has anyone read the reviews coming out of the advanced screening from the Sundance Festival after it's first showing?? !!!!

@Ethan_Anderton: THE RAID 2 is bigger, badder, bloodier and one of the best action movies I have ever seen. Tops the first one in every way.

@firstshowing: The Raid 2 - Legendary. Unbelievably insanely exhilarating. Action at its best. Ever. From sets to camerawork to music to fights-incredible.

@Aaron_Morgan: THE RAID 2 deserves a place at the table with the GODFATHER movies. I've never seen anything like it. I'm stunned. Absolutely stunned.

@firstshowing: Gareth Evans just pulled off something akin to The Dark Knight of action movies. Un################ingbelievable. The Raid 2 is insane. #Sundance

@jhoffman: I know it is "just a movie" but the violence in THE RAID 2 was just too much for me. I got lightheaded & had to leave.

@ErikDavis: THE RAID 2 is just insane. Some of the best action sequences I've seen. Just plain kicks your ass from start to finish. Wow. #Sundance

@Ethan_Anderton: Never have I ever heard a crowd groan and cringe in pain collectively as frequently as during THE RAID 2. Tons of applause breaks too.

@LeNoirAuteur: The Raid 2: beautifully brutal fight sequences stitched together by a plot I barely cared about
@yogoldsmith: The Raid 2 does the franchise proud with fight sequences that are true spectacle and a complex mafioso narrative to boot. Quite bloody fun!

@TheInSneider: THE RAID 2: An ambitious sequel that broadens the scope of the story considerably. Breathtaking action elicited audible gasps & applause.

@simonsaybrams: THE RAID 2: marital arts's GAME OF THRONES, or ONCE UPON A TIME IN INDONESIA. Macabrely playful & joyfully inventive action: so much fun.

@Ethan_Anderton: Seriously, @ghuwevans needs to teach a class to American action directors to show them how it's done. THE RAID 2 is an action masterpiece.

@russfischer: To deal with THE RAID 2, the MPAA is gonna need something heavier than NC-17. And probably some adult diapers.

@filmfest_ca: RAID 2 - mayhem, mud, and some of the most intense, grotesque yet balletic action ever filmed. More epic, more complex. Epic. #Sundance

@yogoldsmith: Applause multiple times during Raid 2 as sequences were show stoppers. The fights were often balletic with camera immersed in dead middle!

@jpraup: The Raid 2 made me pregnant.

@devincf: THE RAID 2 is a crime saga that perfectly mixes THE GODFATHER with martial arts. It was better than I hoped. #sundance14

@TheInSneider: W/ THE RAID 2, Gareth Evans cements himself as one of the greatest action directors in the world. Totally deserving of the standing ovation.

@Ethan_Anderton: Standing ovation for @ghuwevans here at #Sundance. And he deserves every clap.

@EricVespe: If The Raid was Assault on Precinct 13 Raid 2 is The Godfather. Sprawling crime epic with amazingly brutal hand to hand violence

@GermainLussier: The cast of quite possibly the best action film ever: The Raid 2. #sundance @ Eccles Theatre Instagram

@devincf: It's hard to pick out what is the best action scene. They're all unique, badass and shot with absolute brilliance and beauty.

@keithcalder: I think the kitchen scene in THE RAID 2 is the best fight scene I've ever seen.

@LeNoirAuteur: The fight sequences in the raid 2 are dazzling, the cinematography, choreography and editing really make them work

@modage: The Raid 2 (B+) Not as perfect as the original but still a goddamned great time. Theatre applauded after every big fight. Epic. #Sundance14

@devincf: BTW it seems pretty clear we should expect THE RAID 3.

@devincf: Can't even imagine the money every studio will be throwing at Gareth Evans now. This movie is just so much bigger and better than THE RAID.
D

I can't believe that the sequel makes the original look like child's play. I want to believe this is overhype as I can't imagine a movie being more riveting and action packed than Raid 1. But there are more actors, the budget is bigger and the movie takes place on a wider scope. I haven't even watched a trailer or a plot description as I don't want to know anything in advance.

I can't believe that I read one person was so overwhelmed at the mayhem/carnage/action while watching the first screening that they actually passed out in the theatre and they had to halt the movie, take them away in a ambulance!!!

Every review I've been hearing about this movie has been out of this world. I've been fighting hard not to watch the trailers or read the storyline beforehand.

New York IMIXers with the first peak.......fill me in on the goods!

Shout out to the director for Raid & Raid 2 tho
D

Shout out to the director for Raid & Raid 2 tho
Click to expand...

LOL......Iko Uwais >>>>>> Tony Jaa. He's already plateaued. There's still Raid 3 to come. The Protector was mediocre and I heard part 2 is even worse. He's doing a lot of wire work and CGI in his movies. Uwais worst movie was Merantau which wasn't all that bad. How'd you rate Raid 2?

Heard a rumour coming along that they're trying to get Jaa in Raid 3. That'd be crazy!
D

Man just watched this over the weekend. Can't believe the theatre was only a quarter full on opening night!!! It wasn't perfect.

That said this is THEE greatest Martial Action movie ever made. Some of the kills in this movie were so brutal and I'd never seen before in a movie.

Then the fight before the Assassin, that coulda been the end fight for many movies.

Then the end fight is one of the 3 greatest end fight scenes I've ever seen.